So you've finally reached level 60 and unlocked the amazingly cool stuff that is available there. Along the way you put your engrams into areas you thought would be useful later one but wait!

After 17700 exp and buying whatever you want you've finally seen the truth.... You can no longer afford the late game items!

With a level cap of 60, netting you a grand total of 1104 engram points, which is more than enough to cover most bases. I at first didn't believe so until I checked it out myself. How many people will be unlocking everything they can early game, only to find that they are now screwed for anything in the late game? I know I did at first, so here's a little guide of things to get as you level that mean you can get the most out of a single player exerience while not losing to the elements!

PLEASE NOTE. This guide doesn't cover the level requirements for any engrams, nor does it tell you what is needed to make anything. This is a guide to show how much it'll cost for what I personally believe to be the most optimal way to use your engrams while being able to cover as many basess as possible, allowing for a more stable single player method of playing as well as allowing you to be a supportive multiplayer role. If there is a demand for it, I will add in the level requirements for each item as well.

The Basics - Staying AliveForgetting the total amount of engram points you have to spend when you get to level 60... What are you going to START by getting? These are the basics of basics, the items you'll want to start with so you can actually survive in this unknown land...

First things first, you're going to want an axe, a campfire, a spear and a waterskin. This world can have some very extreme temperatures, ranging from anything as hot as 42 decgrees Celcius to anywhere as low as -12 if not colder. Having a waterskin handy will greatly reduce the need to constantly gather berries to quench your thirst, while having a campfire will allow you to keep yourself warm while having a place to cook your food. To get that fire going you'll need wood, hence the axe, and you'll need food, so that's why you'll want a spear! Simple no?

Now that you're well fed and won't die of thirst, you'll want to make sure you can keep your temperature at a more stable level without the need for a campfire every ten steps. You'll be wanting clothes and a place to sleep!

A full set of thatch building materials, a full set of cloth armour and a sleeping bag to have a one time respawn if you die might take a few levels so get smacking those dodos. It will all be worth it when you can stay out of the rain!

A Good Defence is a Good OffenceSo you've got clothes... You have a home... You have a spear... However is that really going to be enough? There are a lot more dinos out there than dodos and a lot of them are very aggressive... You've met your fair share of Dilos and even a few Raptors which are easy enough to handle with your spear, but as soon as you see a scorpion that's game over. Run or die... Also these one time respawns are getting REALLY expensive... We need a better alternative and fast.

First of all, we want to get ourselves a slingshot. This will probably be your most used tool in game, as it not only counts for ranged warefare, but also knocks the dinos out (not the big ones like the t-rex or the bronco though so be careful!) so that you can either get an easy kill, or you can attempt to tame them to have your very own battle bet! (Or item chest... your choice).

This will allow you to make your next dangerous weapon, the bow and arrow and the even more powerful tranq arrows. These have a downside of doing more damage to dinos, but can even knock out the big ones! This requires narcotics however, which are a tech tree of their own.

You'll also want a bed, a way to store things and perhaps it's time to upgrade those walls... Too many sleepless nights from Dilos breaking in.

The slingshot, mortar and pestle, narcotic, bow, arrows, wooden building blocks and storage box will cost you a total of 179 EP

While we're at it, we'll have the level requirements to upgrade to Hide armour and upgrade that storage box (because lets be honest... 100 wood in a single box is NOT the best use of space... These will add an extra 54 EP to the total cost of things.

Strike While the Iron is HotFinally we break into what I've felt in my current state of gameplay is the slowest part of all... Getting your first chunks of metal to move into the metal processing... Lets make it easier on ourselves and say we "came across" some metal, and now it's ours... What do we do with it?

Well, first we need a forge, and then we need thngs to make with the metal, so we'll need the metal tools and the smithy. These can take a while to make but they are worth it. You'll also start to see Chitin Armour coming up as well as the final piece of wood building blocks, the window.

Yes they are! However to make these we need to go aaaaall the way back to the start again. Remember that mortar and pestle?

Well we now need sparkpoweder and gunpowder, as well as a spyglass for making scopes. The gunpowder will give you access to the flare gun, which whill allow you to make the longneck rifle and it's simple rifle ammo.

In total these will cost you a whopping 209 Engram Points... That's quite a lot but it's an entire metal age... It's bounfd to cost you a lot!

The Final ApproachFinally... The last stretch... You've passed over the metal building blocks because you've seen the outline of the final engrams... That looks like a rocket launcher, and that looks like a mounted machine gun! Well you aren't far off!

Pick up the Fabricator and the silencer as you're going to want these. One because why would you ever want to attract more of the dinos to you (or perhaps scare them away) and the other because you're about to unlock the best armour in the game... Flak... Guess where it's made... Yup, in the fabricator! You might also want to grab the Flashlight Attatchment for later on.

Don't forget to unlock Polymer and Electronics so you can make and repair the guns you'll be looking to learn! These are pretty important to the lone wolf as they won't be easy to come by if you're on your own.

Electronics will be needed for things such as the Auto-Turret, but they cost you a lot of EP and we want to maximize customisation while keeping it "optimal" (and I use that term lightly) for a single player. So lets miss out on that, going on a killing spree with however many bullets you've managed to miraculously make. You've finally unlocked the final few levels and their secret wonders... Finally you have access to the Assault Rifle and it's Advanced Rifle Bullet.

As well as this however you notice the Holographic Sight and... Laser Attatchment? Hell yeah! What next!?

The final levels produce the best yet... The Rocket Launcher is now available... Now lets see what dino DARES to attack you!

All of these final upgrades will cost you 264 Engram Points.

Level 60You've done it! You broke through to level 60, there's nothing else beyond this point. If you've followed through this guide and not unlocked anything extra, you'll still have a good 290+ Engram Points to spend on whatever you want!

Get a cooking pot for any recipies you might have found, but remember you'll need to work on irrigation and farming to really get those working.

Maybe finally upgrade to metal walls so you don't have to fear even a t-rex breaking through your front gate.

Perhaps you'll want to test out the grenades and work towatds a C4 or Grenade launcher?

Those electronics you skipped past earlier are looking pretty tempting right about now... Especially with it being able to keep food for longer...

Maybe you'll want to craft a few saddles to ride dinos... Know what it feels like to ride the back of a shark, be the arms of a t-rex, touch the clouds with a pteranodon... The world is your dino egg and your engrams are ready to help you hatch out and break free. From here on out, you can go any way you want and still be able to do a few extras that you normally wouldn't (unless you want to get every saddle... Those things are expensive and there's a lot of them!)

Please also note that I included EVERY part of the "building blocks" for the base. You might not want windows, you might never use catwalks, you might never even use ladders and instead choose to get everywhere using ramps as well as using them for "roofing" etc. This is all up to you, and could even free up some more points to put elsewhere.

This guide was created to be a semi "optimal" setup for using your engrams as a solo player, while leaving enough engram points to choose where you might want to specialize into if you were to be playing with a group of friends. (In which case you might not want clothing, but instead choose to spend all those points in metal walls etc so someone else can cover clothing. That is what makes teamwork so potent in this game!)

In the creation of this guide, I myself chose to look at electronics and how they might be used, which left me with 141 points so I got the saddles for the rex, megalodon, sabre tooth, mammoth and pteranodon. I also wanted to start going into farming but ran out of engram points before I could even get a farm... Nevermind, maybe next time. I'll have to make do with meat and berries!

If you have any questions please feel free to ask. I will be playing on a twitch sub server fortwitch.tv/tangentgaming under the name Warlock and there will always be members of the community about that will be willing to help with whatever questions you may have. Please bear in mind that we are still in the early stages of gameplay on this server with the highest player being about level 30, so we will not have too many detailed answeres on endgame things such as Electronics and such just yet. :) 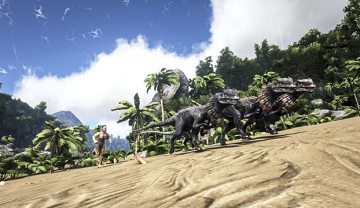